PCS members have faced numerous attacks on their jobs, pay and working conditions

over the last decade and before. Whatever your views on Brexit, one thing is clear, whatever ‘promises’ the Tories made to workers before the election, their majority in parliament will be used to further the agenda of their friends in big business and the city.

Already we see signs that the pre-election promises are being reneged on. Their promise, for example, that no one would be forced to sell their home to pay for social care has been relegated to ‘a belief’. We have seen the beginning of an offensive against trade unions by threats to ban industrial action on public transport, which has echoes of Margaret Thatcher’s ban on trade unions at GCHQ. And it is looking more likely that their so-called ban on Fracking was just an election ploy.

Of course it is likely that the Tories’ first set of policy announcements will contain some sweeteners coming immediately after the election. But the Tory big backers and donors will sit patiently as they know that Johnson has 5 years to repay them.

It is inevitable that this repayment must, and will, include attacks on our public sector workers and services. Therefore our priority is to use this time to prepare our defence, to strengthen our organisation, increase membership and build our branches to be the strongest that we can.

It is important that comrades have a well-earned rest over the festive period because it is clear that in the New Year we will face some massive challenges.

Our PCS campaign will include the three main strands:

Pay, where the Tories have clearly not budgeted to lift the 1% cap anytime soon.

Pensions, where our members are currently overpaying by 2% every month. The government has already stated that, following the brilliant FBU victory this week stating that over 6,000 firefighters are entitled to return to pre-2015 pension schemes and PCS will be quick to make our representations to Cabinet Office about the implications for our members’ schemes.

Civil Service Compensation Scheme, where the Cabinet Office previous confirmed that the 2010 terms would remain in place until at least 31 December 2019, our campaign has defended these terms since 2016 with hundreds of millions paid to workers covered by the scheme, but now, with an emboldened Tory government re-elected, it is clear that they could move to attempt to introduce detrimental terms.

On all three issues, we clearly need to prepare the ground for the battles ahead. Improved technology and use of the new branch app which have helped to deliver successful recent ballot results in HMRC Ealing and ATOS are important in delivering results and engaging our members over the issues that lie ahead.

Crucial to delivering the aims of our national campaign is a strong, effective, united leadership. I am honoured to be the Democracy Alliance candidate for President, leading a team of experienced, principled socialists and trade union activists. We have lead PCS through some difficult times and never hesitated to support members in the campaigns that matter to them.

That is why I am so pleased that Mark Serwotka was overwhelmingly re-elected as your General Secretary. I have worked closely with Mark, as President, for the last year and his commitment to PCS members in both the public, and private sector, is unwavering.

As we face, undoubtedly, difficult challenges ahead, PCS needs a united, focused and experienced national leadership with a strong, fighting left organisation – Left Unity, determined to defend both our members at work and the public services that we are proud to deliver. So, on behalf of the Left Unity National Committee, thank you for all of your hard work to get our candidates elected throughout the year and we wish you a Merry Christmas and a Happy New Year. 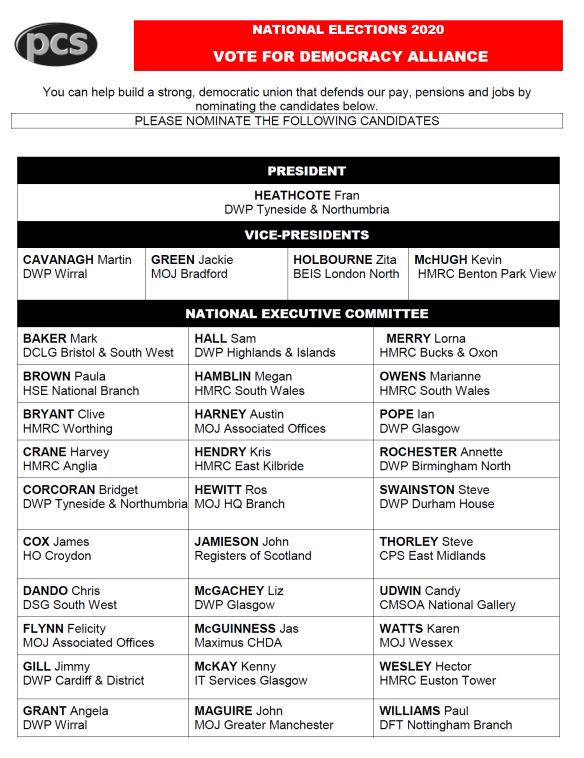 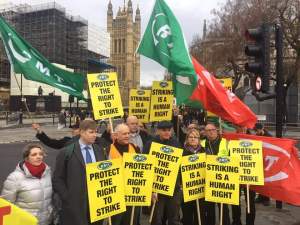 On Thursday lunchtime myself and other PCS members across Whitehall joined together to stand in solidarity with rail workers, who are the first in the crosshairs of this rabidly right wing government. As a largely white upper class Tory Government enjoy the gravy train in Parliament, they were announcing some of the most draconic anti trade union laws. Trade unionists have fought and died for our rights, and we will need to continue fighting against these attacks and for an 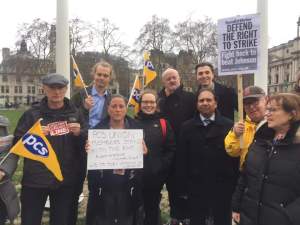 The Queen’s speech contained a new Bill that would curtail the fundamental freedom for rail workers to withdraw their labour. A last resort that workers only ever use in despair at rogue employers. Over the years the RMT in particular have irked the rich, who think they have some right to punch their way onto a tube to get to work every day to make millions while not giving a hoot about the rail workers. Strikes are a minor disruption to our lives that undoubtedly have saved lives over the years. If, like me, you have stood waiting for a tube in rush hour, and watched as people push and shove in the most dangerous manner, while a patient but firm platform worker keeps them safe and ensures we don’t all have to see their brains splattered across the platform, you will know how important our rail workers are. Whether they are the drivers, the ticket office or the platform first responders. This was even more acute for Londoners on 7/7 when it was rail workers who were the first responders, saving lives.

But apparently the fact they deign to keep us safe and fight for good working conditions and pay is far too much for this government. They are now seeking to take away the fundamental right to strike from them. This is the next step in the last 40 years of trade union attacks, which already places us bottom of European countries in the worldwide rankings, and heading lower as most other countries are striving to improve their standing. How much longer will it take for us to be ranked alongside Colombia – the most dangerous place on earth to be a trade unionist?

Not only should we be worried due to the old adage of “first they came for…”, but also rail workers do a vital job and keep us safe. Curtailing their ability to hold private companies, with more interest in profit than safety, to account is crucial for all of us. Our railways and our rail workers are part of tackling the climate emergency. These are green jobs, and they must be safe jobs in places safe for all of us. That is why myself and others pledged we would stand shoulder to shoulder with our RMT comrades and we will win.

Left Unity is a democratic organisation within the Public & Commercial Services Union (PCS) that embraces a wide range of socialist opinion and is represented at every level of the union, from branches and workplaces, to the National Executive Committee. We believe in a democratic and fighting union and have a proud history within PCS and its predecessor unions in delivering for members.