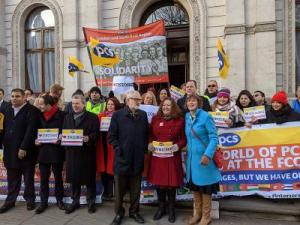 Several mornings this week, I have been proud to support our PCS Interserve strikers on their picket line outside the Foreign and Commonwealth office. These low paid members are on strike from 3rd to 28th February for a set of very basic demands.

They are on strike to get basic conditions that most of us take for granted including proper sick pay and trade union recognition. The PCS NEC have pledged our full support and to stand shoulder to shoulder with them, every step of the way until they win a better deal in the workplace. 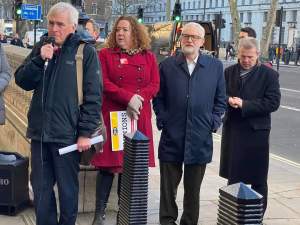 This week (Tuesday), we held a strike rally at the picket line to coincide with Heart Unions week, supported by many Labour MPs, where speakers included Mark Serwotka, Frances O Grady, Jeremy Corbyn, John McDonnell and PCS Parliamentary group chair, Chris Stephens from the SNP. Having such high profile support really gave the strikers a boost, for many, this is the first time that they have been on strike and it really helped their morale.

On Wednesday, they held a successful and well-supported parliamentary drop-in to further raise awareness of their campaign. We really need the FCO and the Foreign Secretary to engage with us now – this dispute would be so simple to settle if the willingness was there. 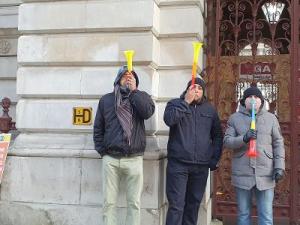 The strikers are picketing every morning and it is very cold. Many of the strikers don’t have English as a first language, and the banner which reads “We speak many languages but through our union we have one voice” really has a resonance.

Spirits remain high as they leaflet people who pass by and there are core team who picket every single morning. Solidarity is always appreciated and just spending an hour on their picket line if you happen to be in London really helps.

Left Unity members are encouraged to support the picket lines if you are in London, donate to the strike fund or send a simple message of support. Solidarity is not just an empty slogan for us. We will do all that we can to support these low paid workers, recognising that if we can win disputes like these, not only do we give these workers a better deal at work but the whole union and its members are stronger for it.

Fran is standing on the Democracy Alliance slate for President 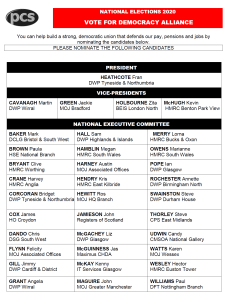