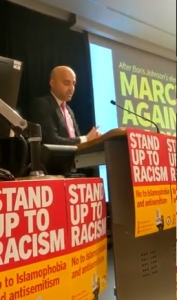 Well thank you so much for that warm welcome, and friends what a great honour it is to be here representing my Union PCS Union at the Stand up to Racism Conference.  The work that you do has been essential to defeat racism and expose fascism in our workplaces and communities.

Whether it is defeating anti-Semitism, calling out Islamophobia or standing with the Windrush generation, you have always been on that front line and I and members of minority communities take huge inspiration and appreciate the work every single of you being here today and stand up to racism do, so thank you for all that you do.

So we don’t often get the chance to celebrate our success, what an extraordinary year it has been since the last time we were here.  In January I had a meeting with the Vice President of Facebook and we had a talk about Islamophobia, racism and anti-Muslim hatred.  She said she wanted to make Facebook the platform of equality and tackling discrimination, harassment – I said to her, she goes how can I do it and I said firstly you have to ban Tommy Robinson and other far right leaders.

Now what I didn’t expect – I had such an impact on here that less than three weeks later she banned Tommy Robinson from Facebook and I said YES!

That’s when the problems started for me in my personal life.  I got around 3000 hateful messages on Facebook, Twitter and Social Media. I had threats of life against me.  I had threats that the far right was going to rape my wife and children.   I was followed on the street, my address was published on far right websites and fake news were printed about me.  I was literally told that to watch my back – we are coming for you.

At that time, it was quite a dangerous time for me but I did not give up and the reason I didn’t give up was the struggle against racism and fascism, whatever the risks to ourselves and our families requires us to show true leadership and requires us to be on the frontline.

So I never let them defeat me; I got up, continued and I am still standing today.

So I know the general election wasn’t the result we expected. But I think it always an opportunity to pause; reflect and celebrate the successes we achieved.  We defeated Tommy Robinson from becoming a member of the European Parliament.  I see Nahella Ashraf here; I see Paul Jenkins who single handily exposed Tommy Robinson in the North West.  So yes we might be a bit disillusioned and we might be struggling with the political outlook for the future; but one thing I do know is that we’re never going to give in to racists and xenophobes and we are always going to stand together.

As Trade Unionists because that’s the important thing – all the people in this room and all of our colleagues in the Trade union movement are working very strongly to defeat racism and xenophobia.  And just to go back to my Union PCS, when I joined many many years ago there was little diversity in our top team.  We know have three strong black women on the NEC, including our very first black Vice president and hopefully in months and years to come we will see a future black leader of our Union.

PCS have been at the heart of the campaign against racism, we have never stopped supporting Stand up to Racism, Unite against Fascism; whenever there has been a struggle we’ve been on the frontline and our Union is committed to continue that support.

Tackling racism in the workplace is the title of the session, I have supported some members dealing with racism following the Brexit referendum.  In a Jobcentre a Civil Servant said the day after the referendum said we have taken back control and its time to get rid of the EU Scum to a migrant worker from the EU.  It took huge support and hard work to get justice for our members.

It’s about tackling racism in the workplace, it’s what one of my colleague has said; that the language of the far right has been mainstreamed into our politics and our workplaces and we must confront it.  I am proud of the fact my Union PCS recognises educating our members and activists is so important – that’s why we are starting to roll out our anti-racism training and awareness sessions on the far right for all our members so they are equipped with the knowledge and experience to take on the battle.